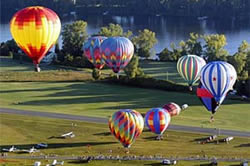 Significant municipalities are Northampton and Amherst. Northampton is a popular destination for tourists, who come to sample the city’s varied shopping and restaurant scene. It’s a nationally recognized showplace for the arts and was ranked the top “Small Arts Town” in the country in John Villani’s book The 100 Best Art Towns in America. Home to a diverse mix of residents and college students, Northampton is an open and progressive community. The Hampshire Regional YMCA and the 150-acre Look Park are just two of the city’s family-friendly attractions.

Known for its unspoiled open spaces, fertile farmland and quiet residential living, Franklin County is also home to cultural points of interest like the New England Peace Pagoda in Leverett, the Bridge of Flowers in Shelburne Falls, and the scenic Mohawk Trail, which attracts leaf-peepers throughout the autumn months. 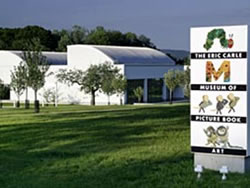 Hampden County
The mostly urban Hampden County is dominated by the cities of Springfield, Chicopee, Westfield, and Holyoke. Among Springfield’s many attractions are the Springfield Symphony, CityStage, the Forest Park Zoo, the museums at the Quadrangle and the Basketball Hall of Fame.

Holyoke, whose 19th-century industrial base earned it the nickname the “Paper City,” is home to Gateway City Arts, the Holyoke Children’s Museum, the Massachusetts International Festival of the Arts, the Volleyball Hall of Fame and Open Square, a mixed-use urban community in the city’s canal district.

Notable visual art spaces include Eric Carle Museum of Picture Book Art in Amherst, the Dr. Seuss Museum and the Museum of Fine Arts in Springfield, and Northampton’s R. Michelson Galleries, which represent many of the Valley’s renowned children’s book illustrators.

Conservation
Appreciation of the natural environment is a hallmark of Valley life. The area boasts numerous nature sanctuaries, parks, forests and ponds.

One notable park is Mount Tom State Reservation, which joins lands held by the Massachusetts Audubon Society and forms a long corridor of wildlife stretching across the Connecticut River. Other beloved spaces include Skinner State Park in Hadley, Mount Sugarloaf in South Deerfield, the Holyoke Range, the D.A.R. State Forest in Goshen, Arcadia Wildlife Sanctuary in Easthampton and the Norwottuck Rail Trail, which extends 10 miles through the towns of Northampton, Hadley and Amherst. Swimmers, hikers, bicyclists, ice skaters, kayakers, bird watchers and cross-country ski enthusiasts alike find much to take advantage of in the Valley’s varied landscapes.